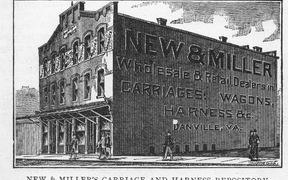 The S. Union Street Pocket Park is nestled between two wings of The Bee Hotel in Danville, Virginia.  The park opened officially to the public on May 12, 2021 with a virtual ribbon cutting ceremony.

The Pythian Building which stood on the site of the Pocket Park was deemed unsafe for renovation. Despite the structure’s instability and conditions in the basement of mud, broken concrete, and sagging floor joists, the exterior walls were intact and their character obvious. Rather than fill in the basement, the team began to envision a public urban park in the River District.

Union Street Pocket Park is built on the site of a building constructed sometime between 1877 & 1885 for the New & Miller Carriage Company during a time when streets in Danville were filled with horses, wagons & carriages. The New & Miller company sold harnesses and carriages on the first floor and had a stable in the basement. When in the park, visitors are standing in the former stable, where horses bringing tobacco to auction would rest while their owners conducted business.

The 19th century builders of the Pythian Building would be happy to know their walls still stand and have been reimagined into a unique, historically significant park for the 21st century.

The exterior walls of handmade brick and hand laid stone were preserved, stabilized and left unchanged to showcase former windows, floor divisions, staircase locations, beam locations and layers of paint. They are a beautiful canvas for new park elements and a compelling backdrop for photography. Recessed brick windows are where horses were tied. Large door openings in the east wall are where horses & wagons entered the stable from an alley connected to Patton Street.

Mounting blocks were once common features in the built landscape. One has been created in the front of the park as a nod to horse transportation and to serve as informal seating and a photography spot.

The trench drain and brick band running east to west locate the former division between the carriage and harness stores.

Original elements from the Pythian Building were saved and redesigned into new features for the park:

Thank you Danville for seeing the potential of this space and making the investment to create a new park for the community.

The South Union Street Pocket Park is also available to reserve for events.  To find more out about that, call Danville Parks and Recreation at (434) 799-5200.

The Pocket Park’s design was done by Trenda Carter Leavitt of Beechgrove Design Landscape Architecture in collaboration with Danville’s Office of Economic Development, The Bee Hotel, Blair Construction and many other contractors and designers, including Elliot Electrical, Evergreen Contracting, Reynolds Easley Manufacturing, Solid Stone, Yeman Excavating, and  Modfountain. Brian Nichols, VP of Construction with Blair Construction expertly coordinated many individuals and companies to construct what you see if you visit the park today.